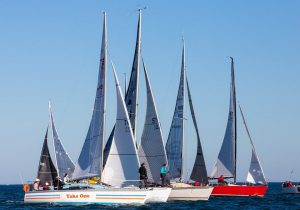 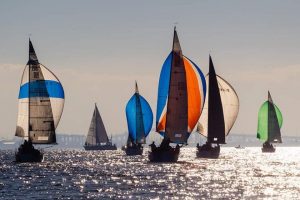 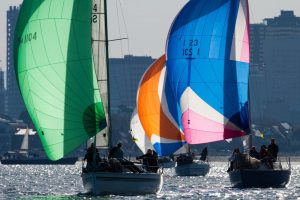 In wintry conditions in St Kilda, Melbourne, a DSC team competed in the Australian Women’s Keelboat Regatta (AWKR) over the June long weekend. Twenty nine years ago, two women started the regatta with the aim of inspiring female sailors and encouraging women to get involved in sailing. Held annually at the Royal Melbourne Yacht Squadron in St Kilda, the fleet has grown each year and this year saw 39 entries with over 300 women competing, with ages ranging from 15 years of age to early 80s….Every Australian state, the NT and NZ was represented and nine women raced their own yachts.

Ruth Lawrence, who races her S80 at Drummoyne, skippered Take One, generously lent by Kelly Knowles (who jumped onto Hot D8). Ruth was joined by Bridget Canham, Kris Drummond, Natasha Miller and Jessie Lawson to make up a tight team. With two divisions, Take One joined 25 yachts in Div 2, 13 of them s80s who raced neck and neck.

Day one gave us blue skies and a northerly, with variable winds around 5 to 23 knots.  As the forecast was predicted to be freshening especially on Monday, three races were held on Saturday.  Most boats had a lot of headsail folding at the end of the day having used multiple ‘headies’ across the three races.  The northerly course was a windward leeward across port Phillip Bay, which left the Drummoyne team looking for their usual islands and ferries.  A great day was topped off with the starter’s award for best starts of the day.

Day three was definitely a highlight with racing starting late which was meant to allow the breeze to blow through.

Just before the start of Div 2, it began howling with gusts up to 35 knots leading to one s80 to T-bone the leading yacht in Div 1.  Our team got organised, reefed and sailed with a nicely behaved number 3 headsail.

There was sensible distances at the start with most boats allowing for the conditions.  At the top mark one boat ambitiously hoisted a kite, only to be immediately laying over – ‘out on their ear’.  There was a dismasting during the afternoon, with Balancing Act 2 (trucked from SA) loosing their rig (fortunately with no injuries onboard).

Our DSC team sailed with big smiles on their faces, with Take One, taking off and definitely thriving in the conditions. We arrived back to the breakwater with boat in one piece and all accounted for. Overall we placed 7th  (on EHC); thanks Take One for looking after us and thanks to the AWKR for great racing.

Any women who are interested in getting into sailing or competing in next year’s regatta, please email Ruth Lawrence (scoutie3@gmail.com.au)