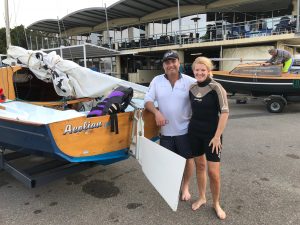 This season we welcomed Darren and Kylie Chignell who are sailing Aeolian.

Although both of them are new to this type of sailing, they have not only been holding their own, but improving every week.

Darren is an experienced windsurfer, a former Australian junior champion and state open champion. He has since crewed on various boats, but never owned a sailing boat or skippered before.  Kylie has never sailed before.

Darren said he became interested in the TS16s because he has always loved wooden boats. A carpenter by profession, he considered building one, but said it was hard to justify building when they are such good value to buy. He had his eye on Aeolian for some time before taking the plunge.

He said he had always wanted to teach Kylie to sail, and the TS16 is a good boat to learn on. Kylie is committed to learning to sail, and is doing well.

Darren said he has received a lot of help and encouragement from other club members and his sailing experience with the DSC TS16s has been excellent.