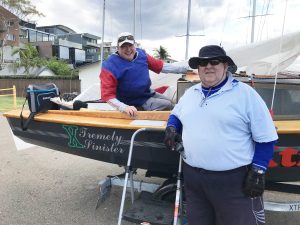 Xtremely Sinister won its first race of the season, Race 6, in a 15 to 20 knot north-westerly which swung westerly and gusted up to 25 knots. It missed the first races because skipper John Gilliard had been unwell and crew John Whitelock had been overseas. They got back on the water in a classic Sydney westerly which John Gillard said they love. He admits westerlies are hard to sail, but says they are OK if you have been sailing regularly. He hasn’t missed a season in 45 years. John Whitelock said they like it fresh, and a few times they were ‘really hammering along’.

Rigging a TS16 on the ramp or pontoon in a westerly is a challenge, and most opted to rig on the beach. Nine boats rigged and made it onto the water, five crossed the start line, but by the end of the first lap only three boats were still racing: Xtremely Sinister, Annette and Uncle Norm. The remainder pulled out in the face of the difficult conditions.

Four skiffs started, and none finished. It was that kind of day.

Race 6 was a handicap race, and all three raced closely throughout, finishing within 1 minute 2 seconds of each other. Xtremely Sinister and Annette had a handicap of 3, and Uncle Norm was on 1, giving Uncle Norm the fastest time, its first for the season.

Uncle Norm is skippered by Eric Partland and crewed by Gary Willis. Eric, in Uncle Bob and then Uncle Roy, won the TS16 championship every year from 2005/5 to 2017/8, except for 2010/11. They took last season off, but Eric and Gary returned this year in Uncle Norm. Race 6 was their best result so far, and Eric said they are slowly getting there. He said Uncle Norm overtook Annette downwind – he said Uncle Norm was ‘really flying’ – but each time Xtremely Sinister sailed away on the working legs