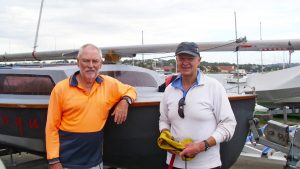 Race 8 was sailed in a nor-easter that race official, Ken Nagle, reckoned was the best for several seasons. With 57 years of membership at DSC he has seen a few.

Ken said the committee boat, which was moored off Balmain near Elkington Park, registered a nor-easter of 15 to 20 knots. Neil Johnson, who sailed the handicap winner, Tranquil, with Brett Pollitt, thinks the wind was more like 35 knots out in the main channel later in the afternoon. He said that sailing downwind, Tranquil was planing. And Tranquil wasn’t the only one.

Certainly the sight of the TS16 fleet racing downwind in Saturday’s nor-easter would have been enough to dispel any doubts about the boat’s ability to sail at speed.

Neil admitted that when he came to the last jibe mark he did a granny. For the uninitiated, jibing is when the boat is most at risk of the boat capsizing. So the cautious skipper will instead turn away from the mark and sail a tight circle, like a granny knot, to avoid the jibe. Tranquil wasn’t the only boat to follow that tactic.

There are 16 TS16s registered. The skippers are generally good judges of their ability to handle the conditions, so only 8 took to the water on Saturday in a handicap race. Three withdrew, including newcomer Aeolian which was sailing a strong race until it experienced a breakage and had to retire. That left five on the water.

The first four, Tranquil, Xtremely Sinister, Annette and Uncle Norm, finished within two minutes of each other. The fifth finisher was Murphy’s Law.