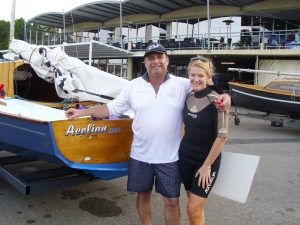 Husband and wife team Darren and Kylie Chignell of Aeolian

Aeolian, the newest boat in the TS16 fleet, had its first win in Race 11. It has been a steady upwards trajectory for husband and wife team Darren and Kylie Chignell. They came 9th in their first race, then 8th, 6th, third followed by two seconds and finally a first. Darren, a former champion windsurfer, had crewed before, but not skippered until this season, while this is Kylie’s first season sailing.

The morning was gusty, the wild SSE wind wrapping the flag around the club flagpole. The forecast was for the wind to ease later, with the possibility of thunderstorms. Several sailors decided not to chance the conditions, but once the eight starters were on the water conditions eased earlier than expected.

Race 11 was a handicap, with all boats starting within seven minutes. It was closely raced with the first four – Aeolian, Murphy’s Law, Uncle Norm and Annette – finishing within 35 seconds.

Darren said he had to fight hard to win, “between Murphy’s Law, Annette and us it seemed at every mark you could reach out and touch each other, and each mark we were in different positions, Annette winning, then Murphy’s Law.”

Aeolian was second around the last mark, down off Huntley’s Point, after Murphy’s Law, with Annette close behind. By that stage the wind had swung more to the east and instead of having to tack to the finish line, it was a straight work for most.

Darren said he has really enjoyed his first races at the helm, with the TS16 a “really good boat to sail” and the TS16 crew very friendly and encouraging, “I don’t think there was one person who didn’t congratulate us.”

Kylie enjoyed the lighter conditions, and said it meant Darren had time to explain his tactics to her. She, too, feels welcomed by the club.

She said Darren was very focused throughout the race. Darren said “one thing I really love about racing, you don’t think about anything else other than sailing.”

Race 11 was the last in the Spring Point Score. The Point Score winner is Annette, Ron Johnston and Ben Speed, with Uncle Norm, Eric Partland and Gary Wills, second. Aeolian was third. The winner of the Spring Season Fastest Time is Uncle Norm, followed by Tranquil, Neil Johnson and Brett Pollitt, then Annette.