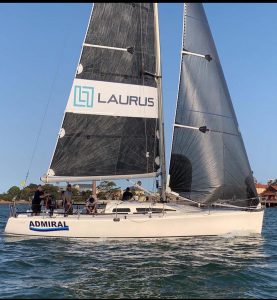 On the way to the Hobart start

Its every yachtie’s dream to do the iconic Sydney to Hobart yacht race, especially in their own boat as skipper. This year, it was Steve Piper’s turn. In his beloved Sydney 38, “Admiral,” he and his dedicated, hardworking crew, would race up until the last moment to ready the boat for the starting line at 1pm on Boxing Day 2019.

Steve’s dream started so much earlier, even without him knowing. The timber Blue Bird, “Sandpiper” was his first competitive yacht, racing at the Drummoyne Sailing Club Twilights, then in the S80, Clairvrey. The next boat to race at DSC was an Adam’s 10, “Coconut Telegraph,” and finally, his prize, Sydney ’38, “Admiral.” All these boats became winners at DSC under Steve’s helm.

“Admiral’s” crew started to evolve, competing in 3 CYCA winter series and later the 2019 Sydney to Gold Coast race. This was to be our first major offshore race, it turned out to be a beautiful spinnaker run to Ballina, at times, white knuckle helming, with 3-4 metre swells, then a nice work around Byron, and a tight reach to Southport, glorious! This is what draws ocean sailors to the sea.

The next goal was the 75th 2019 Rolex Sydney to Hobart Yacht Race. Cat 1 is an expensive undertaking. With lots of borrowed gear, thanks to Luna Sea and Avalon, help from our crew, and new sponsor Laurus, and don’t forget Steve’s family. Danbuoys, life rings, jib tops, code zeros, a new main and number 1, and a whole lot more was acquired. Without the efforts of our yacht manager Andy, and plenty of others, none of this would ever have happened. But there was still one more hitch, insurance. On Christmas eve, Steve’s last-minute call to the CYCA was successful, and followed by a visit to Concord Hospital, a chest x-ray, all clear!

Finally, we lined up for the 75th Rolex Sydney to Hobart Yacht Race.  After sailing past the start boat with storm gear up and 12 POBs, we readied ourselves for the next challenge, the start. 10 minutes, then 5, then bang, we were racing! Watching on TV is spectacular, but out there, you’re more concerned and concentrating on what’s happening around you than to take in all the atmosphere.

We had a great start on the boat end, and lifted high on the eastern channel, tacking ahead of our competitors. After rounding the seaway buoy, we set spinnaker and headed south to Hobart. Finally, able to take our breath, and enjoy what was actually happening, 157 yachts under spinnakers heading south toward Hobart. Wow! 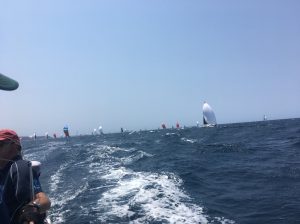 Spinnaker Run down the coast

Our first night out, the instruments started to flicker on and off, and finally went out. Instinctively, Steve called for the mast head light on, and we steered all night by looking at our wind indictor on top of the mast. First light, our tech guru, Ben, had the problem solved and we were back online. Hard work by our spinnaker grinders and trimmers, Andrew, Marco, Jessie and Aaron, saw us flying down the coast to Eden and beyond. The weather and spinnaker ride continued all the next day and night.

Entering Bass Strait, our navigator, James, brought out his hip flask full of rum, and we all toasted to the sea gods for a safe passage across the Strait. Well that worked, sort of. The next radio sched, when we went to start the motor to charge the batteries, the starter motor made this whining noise and quit working. Ok, that may seem to be a bit of a problem, but we do have a plan B, right Steve? Plan B, consisted of a piece of rope and a pulley wrapped around the fly wheel, a bit like an old-fashioned lawn mower. After about 5 hours of wrapping and pulling, wrapping and pulling, we ran out of young guys willing to wrap and pull. That night we ran emergency nav lights and turned off all electrics that weren’t essential. 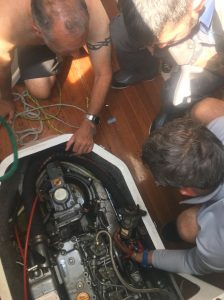 Trying to start the motor

During the night we noticed some deviation in the compass bearing and the heading given from our Nav to steer, sometimes up to 30 degrees out. It felt like we were going in circles, after a few pleasantries were exchanged, Nav was invited to take the helm and eventually, after a couple more circles we were back on course.

The next morning, we sighted Tasmania, just off Maria Island, running a jib top and full main, then the mast head spinnaker, we were doing 9.5 knts, and catching some yachts in front. A few more hours we were rounding Tasman Island and then across Storm Bay and up the Derwent. That night, like so many times before, Storm Bay and the Derwent shut down. Admiral was doing 1-2 knots across the ground, and for the next 3 hours, Steve and watch crew, frustratingly covered another 5 nautical miles. 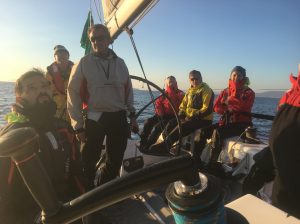 Early morning day 4, we spotted Iron Pot, flashing 3 times every 15 seconds, and finally hooked into a land breeze of 15 knots from the north west, we had the number 1 headsail and full main, doing 7 knots, yes, the finish line is almost in sight. I knew we needed to take the light house to starboard, but the bearing our Nav gave us to steer put the flashing light of Iron Pot on our port side? Aaron and Jessie were trimming the heady and Helen and Brian on the main. The bearing to steer was starting to fluctuate again, and then suddenly Jessie worked out that it was Aaron’s shark repellent anklet band, full of magnetised metal, that was interfering with our electronics and compass. Well Aaron nearly went for a swim right then and there. With anklet removed and compass bearings restored, and all hands-on deck Admiral was charging toward the finish. The work up the Derwent was fantastic, and a real moral booster as we overtook 16 boats between Tasman Island and the finish line. After 90 hours, 11 minutes and 58 seconds, Admiral and crew crossed the finish line, with a sense of pride and exhilaration only the Hobart race can provide. This pride and exhilaration was discussed over and over again at the Custom House Hotel with many jugs of rum and coke. 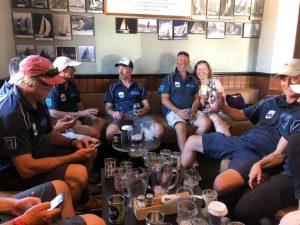 Admirals race to Hobart started long before Boxing Day 2019, without Steve’s passion and all his dedicated teams, this journey would never have happened. 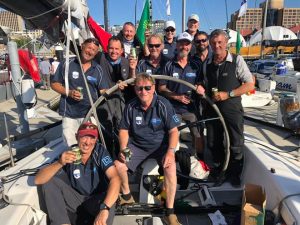