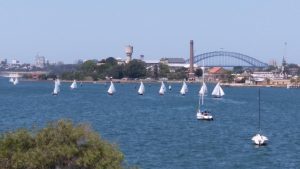 Saturday was hot, 35°, and humid. The wind swung from North-East to East, at about 10 knots, and the water was choppy. It was hardly ideal sailing conditions, but 12 TS16s crossed the start line for Race 14, a championship race.

It was closely fought, with the first seven finishers crossing the line within 3 minutes 15 seconds of each other. Uncle Norm, Eric Partland and Gary Wills, took the lead halfway through the race from Tranquil, Neil Johnson and Brett Pollitt, and maintained it. Tranquil came second, with Helen Joy, Chris Giaquinto and Ross Pollitt, third.

Chris credited Ross with his win, “without Ross I would be somewhere in the middle of the fleet.” Ross has been sailing at DSC for 31 years, and like his brother Brett who crews in Tranquil, sailed in the 16 foot skiffs. Ross also sailed in the Yachts, winning the Blue Division two years in a row.

Chris has been sailing in the TS16s for 11 years, and he has only ever sailed in the TS16 fleet.

Chris said it was an extremely hard day to race due to the heat, “and it was quite busy and choppy,” but he was encouraged by Ross’s enthusiasm. He said a group of them “were always in a pack”. There was strong jockeying for third place between Helen Joy, Hirondelle before it retired, Ultimately Sinister, Murphy’s Law and Annette.

Chris said they were lucky at the last mark, off Mann’s Point, when the wind freshened and a cruiser sailed through the racing fleet, “we came out better than the others”.

Uncle Norm is leading the championship point score and the fastest point score.