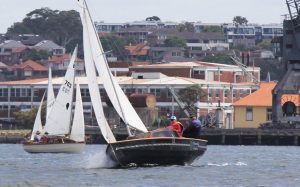 Race 16 could not have been a bigger contrast to the previous week’s Race 15.

While gusts of up to 36 knots hit Race 15, causing it to be abandoned by the four boats that had decided to brave the conditions, Race 16 was conducted in very light conditions.

Race 16 was a championship race, conducted over the easterly course. Races have a time limit of three hours, so starting at 2pm means finishing by 5pm. It took the first boats in the fleet 1 hour 15 minutes to complete the first triangle and reach buoy 6. By 3.30pm it was clear there was not enough wind for the fleet to finish the course within the time limit. The Race Officer, Ken Nagle, made the decision to shorten the course, finishing it just after rounding buoy 6.

When asked what he attributed Ulimately Sinister’s success to, skipper Neil Bilsoborough answered it was due to (his for’ard hand) Denis. Neil said it was a big challenge to race in such light conditions with a big tide. Denis added there was also a lot of fresh water from the rain, as well as rubbish. “We ran over something in the water.”

Denis has been sailing at DSC since he was a boy. He says he is “just glad to be sailing at 75”. He knows the local conditions well. “It was very testing conditions. You have to look for the wind, that’s my job.”

Shortening a course always has two consequences. The first is that the leading boat is happy to win, without another hour or more searching for the breeze. The second is that the second, and maybe the third boats, if they are following close behind, will feel deprived of the opportunity to beat the first boat.

Neil and Denis were disappointed the race was shortened. Denis said: “We needed another lap to get home, we were really looking forward to the last lap. We could have had him (Uncle Norm)”.

Neil adds he was also “looking forward to the last work up. But that’s the way it goes.”