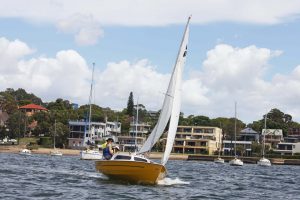 There were reduced fleets in both the skiffs and the TS16s. The forecast was for southerly winds gusting up to 30 knots, rain and 20 degrees. Only the rain forecast was correct, with about 10mm falling. The wind was a southerly, but only about 10 knots. The worst was the temperature which fell to 14.5C and caught most sailors unprepared for the cold snap.

Race 20 was a handicap race. Due to the rather forbidding forecast, only seven boats started. Ten, which is sailed by father and son team Ken and Ian Caldwell, was off first, with a handicap of 19. Both have taken turns skippering and on Saturday Ian was at the helm. Ten held the lead for the entire race, recording their first win in the two seasons they have been sailing with the club.The pair have persevered over the past two seasons. Ian said that last season their aim was just to finish. This season they have been improving, though he thinks that Saturday was the first time they hadn’t come last. Showing up plays a big role in successful sailing, as does good luck and on Saturday Ten held both those cards.

The fleet can often be divided into two races: those boats with handicaps of 10 and above, and those with lower handicaps. None of the other higher handicapped boats raced on Saturday: after Ten started on a handicap of 19 the next boat to cross the starting line was Aeolian on 7. Ten’s lucky break was that in those 12 minutes between Ten and Aeolian starting, the good wind that got Ten across the line died down. “The others weren’t able to catch us,” Ian said. “I think the lighter conditions suited us.” The course was pretty much a soldiers course, mostly sailing straight from buoy to buoy.

Ian was thrilled to record their first win.“We never expected to come first. Most weeks we’re happy if we complete the course. Our goal has been to not come last at least once.” He said they had received a lot of help from other TS16 sailors who were always willing to offer advice. “It’s a great club,” Ian said.