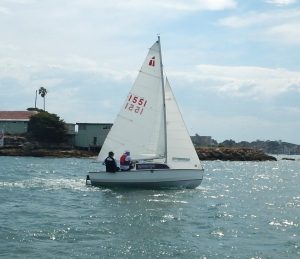 Newcomer Merlot hit its straps in Race 5, winning both the scratch race and the handicap. The wind was a gusty southerly and seven boats started. Three did not finish. It was a closely fought race. The four finishers (in order) – Merlot, Uncle Norm, Tranquil and Aeolian – finished within one minute, seven seconds of each other.

For Merlot, crewed by skipper Pete McSullea and for’ard hand and owner Peter Deall, it has been onward and upward this season. So far they have placed third, second and now first. Peter Deall said Pete McSullea is “an exceptional skipper. He analysed what we did wrong when we got a third. Then we got a second when we made one mistake.” He said the conditions were strong, “but with Pete as skipper I was not scared at all.” The gusty day proved quite a workout. “I workout with a personal trainer six days a week, now there’s a reason to do it,” he said. Pete McSullea said he was thrilled with the win. “I don’t think I’ve ever won a scratch start before, and Peter has come on so well.”

Peter Deall used to crew on a 35 foot yacht. When he decided to get his own (smaller) boat, he chose Drummoyne Sailing Club for its facilities, “it is a great place to get into boats this size”. He researched the TS16s and like what he read, including the fact the boats, in a good wind, can plane. Peter and his wife Linda drove to Adelaide to pick up their TS16, Merlot. Merlot, named for the grape, was built by a cooper (a wine barrel maker). It is also, spookily, the name of Peter’s construction company. “We get to use the (Merlot branded) hats and umbrellas”, he joked. But he quickly found that crewing a yacht didn’t teach him much about being a skipper, so he did the DSC learn to sail course last season.

Merlot also needed some tweaking. Neil Bilsborough rerigged the boat to make it easier to handle, “I couldn’t believe how generous he was,” Peter Deall said, “he fixed several things”. Pete McSullea was also full of praise for Neil’s contribution, “it’s lovely sailing a boat that sails so high”.

Pete McSullea started sailing in 1966, first in Sabots at Snails Bay Sabot Sailing Club, which became Drummoyne Juniors, then in a Snail. He joined DSC in 1969, sailing in a 16 footer, Flash. He sailed in the 16 footers until 1996 when he bought a TS16, Kookburra, which he sailed with Danny Hickson, and occasionally his wife, Sue, and son, Geordie. Pete also took Kookaburra on many crusing and camping trips. The boat was actually named Kookaburra after several kookaburras perched on the rigging when they were moored at Myall Lakes. In 2005 McSullea sold Kookaburra and moved back to 16 footers, sailing with Geordie, who started sailing in Sabots at Drummoyne Juniors, and Elliot Grills. “They learned quickly and we had a lot of fun,” he said. That ended when Geordie went overseas. Geordie has since returned, and recently presented Pete with a grandson. “We’ll have him in Sabots in five years time,” he joked.

After a break of 12 years, Pete McSullea missed sailing, “growing up in Balmain, I always had a boat. I love it.” He rang DSC TS16 president Neil Johnson, who suggested Peter Deall might be looking for a skipper for Merlot. They had a beer and decided it might work. For Pete McSullea it means being back on familiar waters, sailing again. And for Peter Deall it means finally getting Merlot on the water. “It wasn’t fun at the start, “ he admits, “but it’s fun now”.