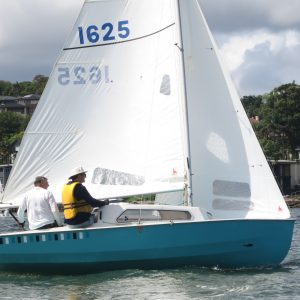 Race 6, a handicap, was held on a sparkling Sydney spring day, with an easterly wind of around 10 knots. Tempo, Peter Dallas and Ian Campbell, was the second boat to cross the start line. It overtook the first boat off, Ten, about one third the way up the first leg and held the lead to the finish. Peter Dallas said he and Ian worked well as a team. “We went out half an hour before the race, tuning Tempo, and it worked. We pointed a lot higher.” He said it was an enjoyable, if stressful, day sailing, “I could see the other boats getting closer”. His main worry was Helen Joy, Chris Giaquinto and Ross Pollitt, which came second.

Chris and his wife Helen have been off travelling and camping, and Race 6 was his second race of the season. “I missed sailing and was itching to get back” Chris said.  Chris was full of praise for Ross, who has years of experience racing and sailing in the local conditions.  “He is a tactician, he knows when to tack, when to pick the lifts, and it all comes from Ross’ experience.” Helen Joy’s race was not without incident: they hit the top mark, off Manns Point, at the end of the second lap, and did a penalty turn. Chris thinks the tide, it was low at 2.25pm and the water off Manns Point is deep, was a factor. The third time rounding Mark 3 was challenging, with the shifting wind and the tide, but Chris said Ross picked the lift and they gave the buoy more room. “It was a perfect day to be sailing,” Chris said.