There were 15 entrants in the Super 30 division of the Sydney Harbour Regatta. We were on Course E, situated in the Sound for the most of the racing, shared with the Super 40’s, Super 20’s and J70’s fleet. Saturday was particularly chaotic, with the Adam’s 10 fleet, Manly 16ft skiff fleet and Manly Ferry Line crossing over our course, which made for a very congested race area. At times, we were more worried about dodging boats than the race itself!!

On Saturday, the start area was positioned in North Harbour, and raced to the top mark in the Sound in a fresh 14-20 knots SE breeze. This led to some great rides downwind, with Ophir topping out at 16 knots boat speed for the two windward leeward races (9th & 3rd place) and then a passage race (4th place).

Sunday had milder conditions with a building Nor-Easter to a top of 16 knots in the afternoon.  We made some rig-tune changes on Sunday which helped our boatspeed in the lighter conditions. The racing format was the same as Saturday (2 W/Ls and a Passage Race) which had us placing 3rd in all of them. The highlight of the regatta was the last race, where we finished 1st place on scratch by 1 boat length to the Melges 32.

The Ophir team had consistently good starts, sensible tactics, good boat speed and no boat handling errors across the regatta which led to an 8 point win for the regatta and also a win in the 20/21 season Super 30 W/L Series – which is a huge credit to the team.

At the SHR presentation, Ophir was drawn out of a hat to win the SHR Grand Prize – a Sail Racing Crew Gear Voucher valued at $2000. Very happy team all round, with the win being  particularly helpful in offsetting the bruises sustained along the way. 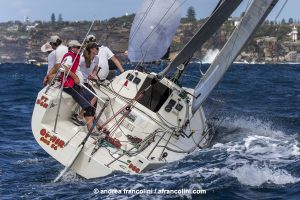 X-Ray added another victory to their regatta tally winning the Sydney Harbour Regatta PHS div 2 on the weekend making it 2 wins in successive years.  Ray said it was a hard fought victory over a fleet of 24 boats mostly bigger than us.  This made the start line very busy so it was essential to get a clean start and sail into clear air which we managed to do 3 out of the 4 races.  Conditions were tricky on both days with some big shifts testing crews and tacticians on all boats.  Ray said he owes this victory to the excellent sailing skills of his DSC crew and great calls (as always) by tactician Robert Speedy.  In addition to the PHS win X-Ray took 2nd place in ORC 2 points behind the very well sailed Agent 88. 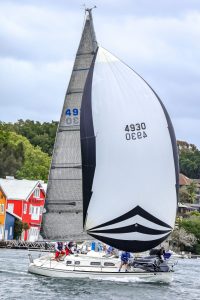