TS16s, also known as Hartleys, race most Saturday afternoons from September to April, with a break over Christmas and the occasional rest days when large-scale events are held at the club. The races commence at 2pm, and are usually well over by 5pm.

The courses are triangular, going around Snapper and Spectacle Islands, and depending on the wind, around Cockatoo Island, as far as Mann’s Point, or down to Huntley’s Point.

The TS16 sailors are friendly but that doesn’t blunt their competitive edge. Some have sailed for decades, others had never sailed until they stepped into a TS16. TS16 sailors range in age from their twenties to their seventies.

If you are interested in learning about the fleet, come down to the club on a Saturday before 12pm and meet some of the sailors. There are also frequent opportunities to crew. 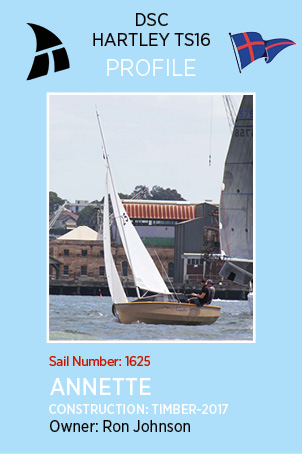 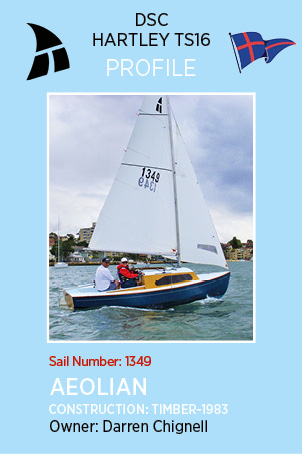 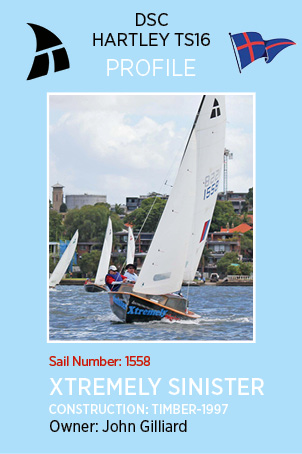 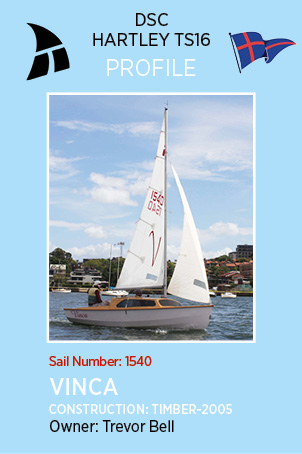 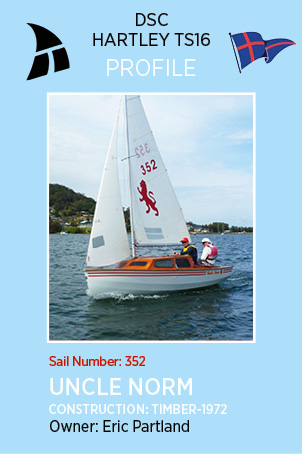 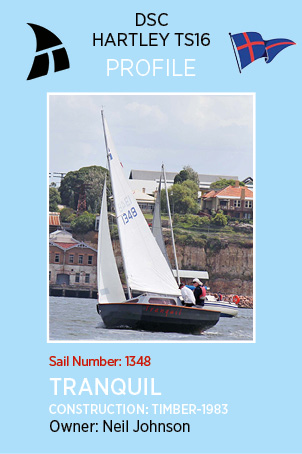 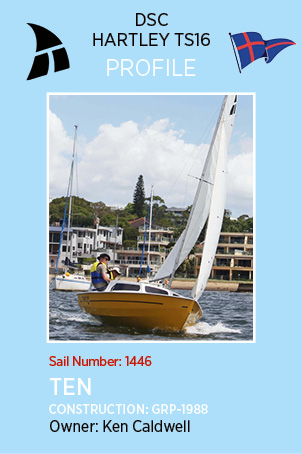 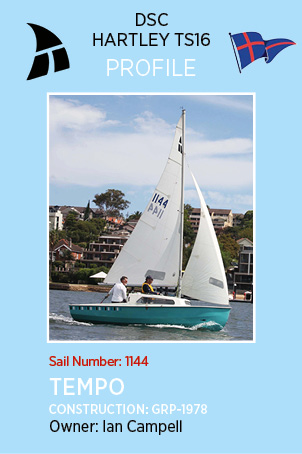 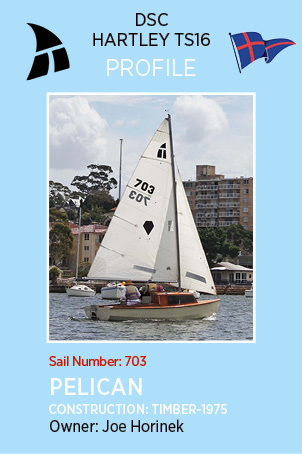 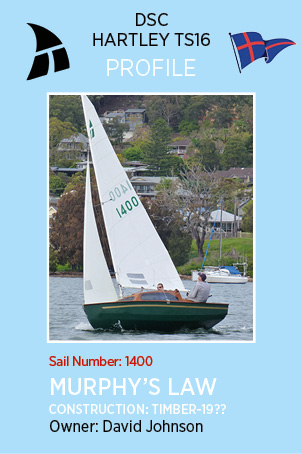 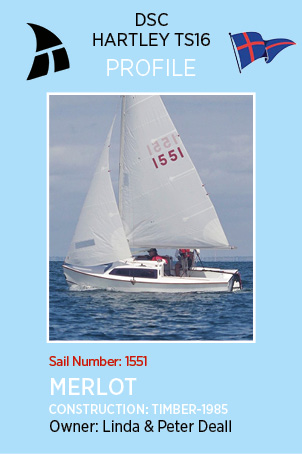 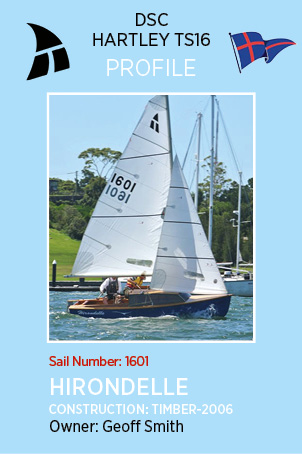 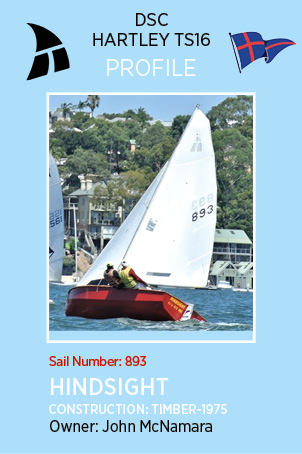 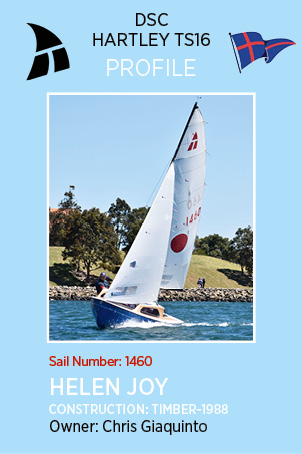 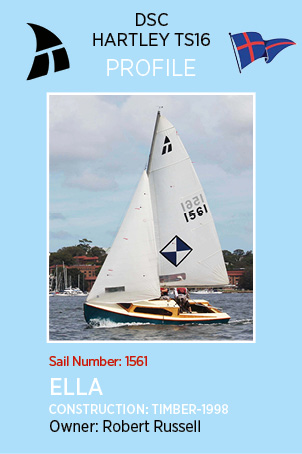 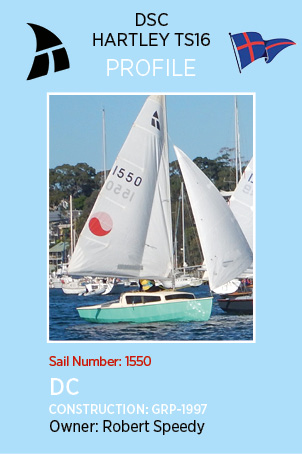 The first race of the season was abandoned due to strong wind and generally inclement weather.

Race two was held in a fresh north westerly, on a run-in tide. Five boats started. The two limit boats off at 8 minutes were Vinca, Russel and Luke Johnston, and Annette, David Johnston and Ben Speed. The two boats vied for the lead from the start line to the finish.  After just over one and a half hours of racing Vinca crossed the finish line just 25 seconds ahead of Annette.

Tranquil, Neil Johnson and Brett Pollitt, was third, followed by Totally Sinister, Craig Jelfs and Neil Bilsborough, and then Tempo, in the hands of its new owner, Greg Forrest with Joe Horinek, who formerly sailed Pelican, as crew.

The new season has brought a number of big changes.

After 65 years, Eric Partland has retired from sailing. Eric has an outstanding record sailing TS16s at DSC. He has won the championship 14 times, in several boats and with several crew members, most recently with Garry Wills in Uncle Norm.

Last season the Johnston family had three boats racing, but patriarch Ron Johnston has decided not to sail this season, though rumour has it he will do some guest skippering. Ron, like Eric, has a long and very successful sailing career. In Ron’s case it began as the bailer boy in a heavy wooden 16 footer at Yarra Bay. Ron’s long-term crew, Kate Thompson, has retired from Saturday racing to take the tiller for the first time in a Laser and race on Sunday.

The Johnstons kept Annette, which Ron built several years ago. It is skippered by David Johnston with his nephew and Ron’s grandson, Ben Speed. Vinca, bought last year from Trevor Bell, is also sailed by two generations of Johnstons, Russell and his son Luke. Ron also has had a stellar career at the club, winning the point score five times.

Your correspondent drove the support boat for Race two and had the company of both Eric and Ron around the course. Listening to them critique the race – discussing the tactics, the set of the sails, the position of the crew etc – was a real education. It was wonderful to hear all those years of sailing wisdom, which no doubt was later conveyed to the crews being critiqued!

Greg Forrest comes to DSC, or rather returns to the club, after a long sailing career that began at Snails Bay Sabot Sailing Club, which became Drummoyne Juniors. He sailed in 16s at the club, as well as in 12s, 18s and offshore.

Aeolian is on the market because Darren is now working on Saturdays. We will miss Darren and Kylie and hope they can re-join us when Darren’s workload makes it possible.