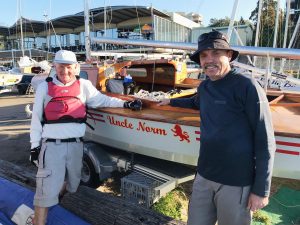 The first half of the 2019/2020 season has served up a mixture of winds and conditions: two WSW gusting up to 35 knots, which resulted in the races being abandoned; an ENE: five southerlies; one race where the wind swung from ESE to NE; and one NW and one NE. Saturday brought an Easterly of 10 to 15 knots.

The TS16s had a championship race, and Uncle Norm, skipper Eric Partland, crew Gary Wills, won both the race and the handicap. Tranquil, Neil Johnson and Brett Pollitt, was second across the line, followed by Ultimately Sinister, Craig Jelfs and Neil Bilsborough.

Ultimately Sinister lead to the first three marks. Eric said Uncle Norm then caught them, and the lead changed between the two again. “Then on the sausage we outran him.” (The course is conducted over a triangle, with the first and third rounds sailing the full triangle, but the middle round just going up to the first mark and back, the so-called sausage.) “We got a couple of good winds shifts and that gave us the jump. Then Neil Johnson caught us as well.”

Eric said the breeze was very fluky, and on the first two works they had “a few unhappy episodes with yachts. The last went to plan”.

Eric, who has long experience sailing in this section of Parramatta River, reckons that if you sail one good leg “you are lucky. You never get to sail three good legs.”

Uncle Norm was built in September 1970, so it will be 50 years old next year. It was most recently owned by TS16 stalwart Norm Thompson, who sailed at Saratoga. After Norm passed away last year, Eric bought the boat and changed its name from Exit to Uncle Norm. Eric said Norm had been a dear friend since they raced 12 footers at Balmain in the 1960s.

It took Eric and Gary several races to get back their winning form. They end the first half of the season leading the Championship Point Score, the Season Point Score and the Fastest Point Score.