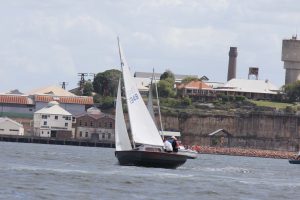 The forecast for the first race of 2020 was for rain, with light SW winds. After a break of five weeks, and with no race the following week, only seven TS16s rigged and raced.

The forecast rain did not eventuate, though there were some very light showers. Race official, Ken Nagle, described the wind as flicking from South to South West, at 5 to 10 knots.

Race 13 was a handicap race, with all the TS16s on handicaps of 5 or lower. In the light winds, the fleet stayed close together, with all seven finishing within five minutes.

The lead changed between Murphy’s Law, Annette and Aeolian, until Tranquil got in front and stayed there, crossing the line first followed by Annette and Uncle Norm.

The working leg, from buoy 8 at Tarban Creek to buoy 1 near the clubhouse, proved to be nearly straight sailing, depending on how the wind was swinging at the time. Tranquil’s skipper, Neil Johnson, said “there were a couple of legs but not many, it was mostly a soldiers’ race”.

It was a day for skill: Neil has sailed the Drummoyne waters since 1963, first in a VJ and then in 16ft skiffs and in 12s (with Balmain Sailing Club). He has sailed with the TS16 fleet since 1988. As a result he knows the local conditions well.

But he said it was also a day for luck, “we got a bit of an opportunistic breeze, and snuck in front”. Neil, who sails with long-time successful DSC sailor Brett Pollitt, said they almost lost their good lead at the end of round one. “The next thing we were sitting in a hole and others almost caught up.”

In such a close race, small changes can make a big difference, and Neil said some changes they made before Christmas paid off, “it felt better than before, it was where I wanted it to be.”