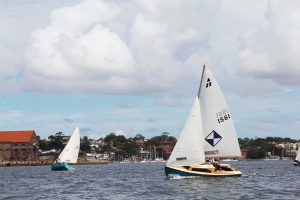 Race 19 was a handicap start, and it was closely fought by the higher handicapped boats until the closing stages of the last leg. The wind was a southerly, 10 to 15 knots with the odd gust up to 20 knots. It was a tight finish: the first five boats crossed the line within 51 seconds.

The winner, Ella, skipper Bob Russell and crew Nick Broughton, were off the 14 minutes handicap, the same as Pelican and two minutes after Tempo. Most of the race was fought out between those three. Bob said it was an amazing last leg, from Huntley’s Point to the Clubhouse.  “We were leading at the final mark, we got the lead on the last run to Huntleys Point. We were close to Pelican (Joe Horinek and Lyndon Keene). We passed Joe and Tempo (Peter Dallas and Ian Campbell) on the way down there.”

Bob said the wind kept shifting, “we would have a reasonable lead, then both of them would come back.” By the time they got to Spectacle Island on the last leg, Bob said that although Pelican and Tempo were “nipping at our heels”, he thought Ella might win it. But then Murphy’s Law and Aeolian moved up. “By the time we got to 50 metres of the line anything could have happened. I was having difficulty laying the pin end of the finish line. The other boats were higher, I couldn’t see what was happening. I thought maybe Murphy’s Law had pipped us.” In fact Ella finished five seconds ahead of Murphy’s Law.  The first four – Ella, Murphy’s Law, Aeolian and Pelican – finished within 23 seconds, creating a headache for the race officials.

Bob said it was a good handicap race. Bob has been sailing with DSC for at least 15 years.  “We have been up and down we have never been in the front half of the fleet.” He has been sailing with Nick for the past three years. Prior to that he sailed with his wife, Vera. He said it was a good breeze on Saturday with no dead patches. “That southerly course is the best for us. Generally the wind seems to be more reliable than when you have to go up to Greenwich.”