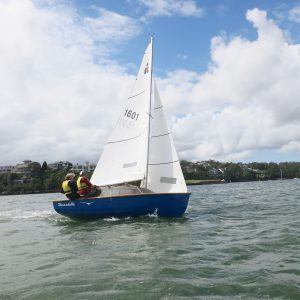 Race 18 was a championship race held in a 10 knot Easterly. The conditions were light, but not as light as the week before when the fleet became becalmed between Cockatoo Island and Manns Point and the race was abandoned when it timed out.

Hirondelle, skipper Peter Barnes and crew Geoff Smith, was triumphant, winning both the championship and handicap races. It was a close-run race, fought out between the first four – Hirondelle, Tranquil (Neil Johnson and Bret Pollitt), Uncle Norm (Eric Partland and Gary Wills) and Xtremely Sinister (John Gilliard and John Whitelock).

They say a race is won at the start. Peter said there was a bias to the pin on the start line, and so both Hirondelle and Tranquil started at the pin end. Xtremely Sinister started in the middle, and the rest of the 14 boat fleet started near the starter boat.Those three boats battled for the front for most of the first two legs.

Xtremely Sinister reached the top mark first, but went around it the wrong way. (On the North East and Westerly courses boats round buoy 3, off Manns Point, on the startboard side. On the Easterly and South West courses, boats pass it to the port side). That put Tranquil in the lead, which it held until the final stages.

Tranquil and Hirondelle lead down to buoy 1, off the clubhouse, while Uncle Norm caught up to Xtremely Sinister. Tranquil held its lead, with Hirondelle not too far behind, on the next work up to buoy 3. “On the windward return Eric and John were bringing the wind down to us. They got close,” Peter said.

On the final work up to buoy 3, Tranquil moved further ahead. “He would have been over a minute in front, then us, Eric and John.” But Tranquil tacked over to the Balmain shore, and missed the wind shift nearer Lane Cove River. “We were in the right place. We ended up crossing and ducking behind his tuck and we got to the top mark first.”

Tranquil reached buoy 1, the last before the finish line, first. “He gybed and left his whisker pole up, we took ours down and got the breeze from Snapper. We were shying and going faster and won by 16 seconds,” Peter said. “It was very exciting.” Uncle Norm crossed the line third, 17 seconds behind Tranquil, followed by Xtremely Sinister. The entire fleet finished within 18 minutes.

Hirondelle won the handicap, with Pelican (Joe Horinek and Paul) second, and Xtremely Sinister third. Uncle Norm and Tranquil are tied for first place on the Championship Point Score, a situation that will be resolved in the final Championship Race later this month. Uncle Norm is just one point ahead of Annette on the Season Point Score, so the last five races could prove very interesting.