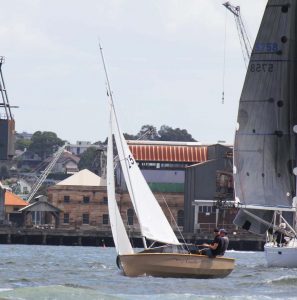 The conditions looking unpromising before Race 11, the first of 2021, began. After some discussion, and driving DSC1 up along Long Nose Point to study the flag on the Sydney Harbour Bridge, and the kites on the yachts racing from Middle Harbour to somewhere down river, the day’s race official, Alex Palmer, opted for the Easterly course. The light winds then picked up to about 15knots and blew from the east.

It was a handicap start, with a run out tide (high at 11.26am was 1.83 metres, low at 6.05pm was 0.34 metres). The boats finished in the order in which they started, with the exception of Annette, Ron Johnston and Ben Speed, which took the lead at the final buoy.

The first two boats off, Pelican, Joe Horinek and Lyndon Keene, and Tempo, Peter Dallas and Ian Campbell, battled all the way to the finish line. Joe said the two were “cat and mouse all day”. But the final result came down to the last leg, from mark 3 at Mann’s Point, to mark 1, off Drummoyne Sailing Club and the last short stretch to the finish line. Joe said Tempo was leading up to the last time rounding mark 3. “Tempo caught us and they were a good 100 yards in front at 3. Then we caught them again, but Annette, he was brilliant at the last run”. Joe said he noticed Annette coming along closer to the Cockatoo Island shore. “I thought that’s a good idea and went over and we both caught up with Peter.” At the last buoy, Ron rounded inside Pelican. Ron said, “We gybed the jib before 1, ready to take off .” That propelled them into first place, and Annette crossed the line eight seconds ahead of Pelican, with Tempo 11 seconds behind Pelican in third place.

Ron said of his run down between Cockatoo and Balmain, “We knew where to go, we sailed out of the tide.” Ron has long experience sailing at Drummoyne, and he pointed out that the runout tide “always favours the handicap boats”. Peter Dallas said Tempo had “an extremely good race”, while admitting he should have sailed closer to Cockatoo. Most importantly, Joe, after his first race of the season, said “it was an excellent race”, and Peter said “it was a good race, I enjoyed it”. Merlot, Pete McSullea and Peter Deall, had the fastest time.